CULVERHOUSE SPOTLIGHT - BIO OF CAROLYN RHODES AT UNIVERSITY OF ALABAMA 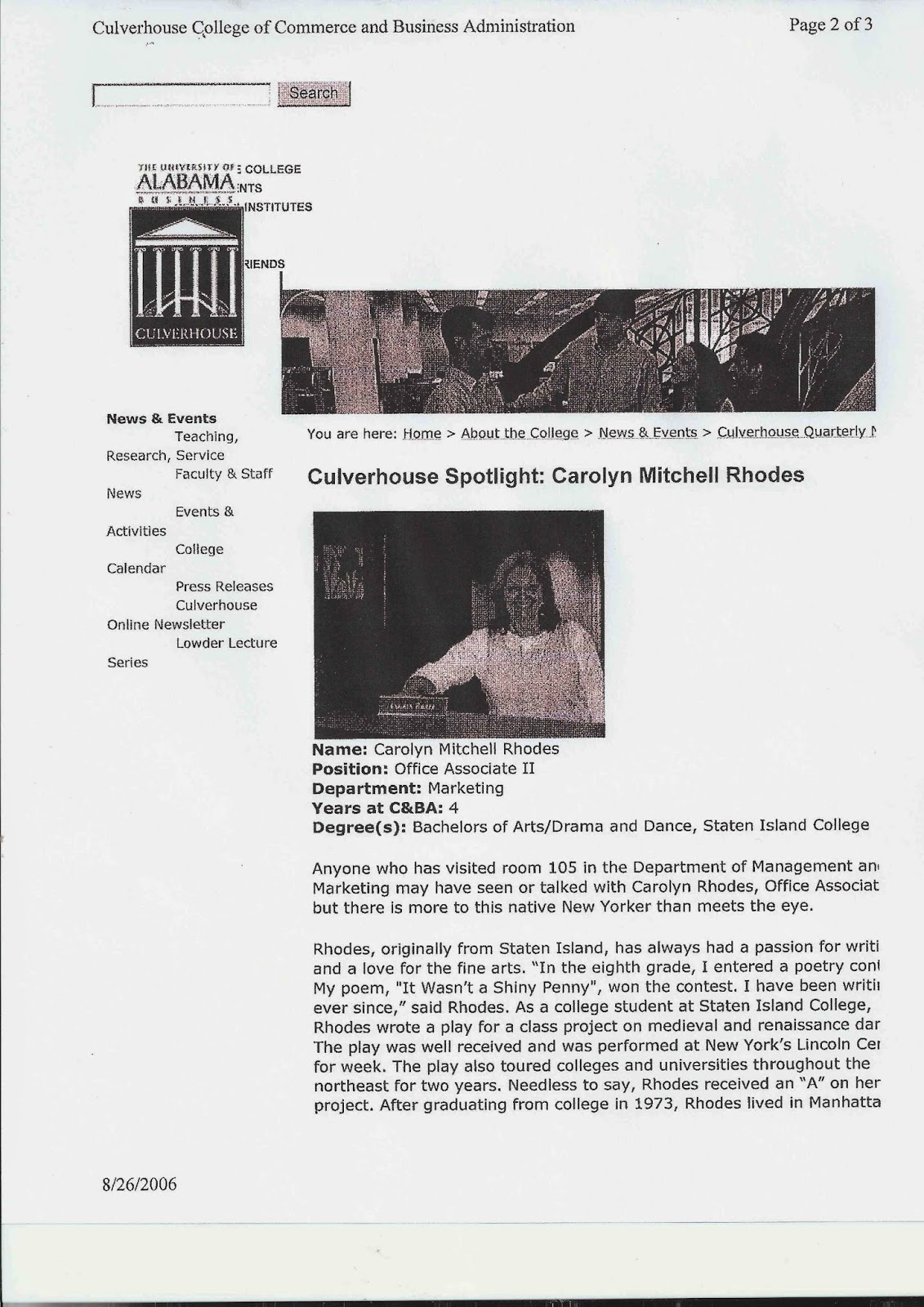 Portal to the Past

Visit the newly renovated Jones Archaeological Museum! State-of-the-art exhibits tell a story of the nobility who once lived at Moundville. Stunning artifacts, recreated scenery and a special effects theatre are all part of the new displays. While you’re there, don’t forget to visit Knotted Bird Gifts andThe Black Warrior Coffee Company.
The buzz: You may visit the online gift store, which is open after the final Saturdays in the Park.

(Take link above for more information.)

The first SATURDAY IN THE PARK, Americorps Vista volunteer,  A discussion of Native American Plants nearby and  teaching crafting hemp bracelets and key chains in the land surrounding the Museum.

Director Bill Bomar, of the Moundville Archaeological Park, invited me to tour  the gala celebration grand re-opening of the Jones Archaeological Museum on May 15, 2010. He explained,  “In order to fully appreciate it, you would have to develop an understanding of how rich the culture was.”

The Park is located off Highway 69 south and is a short distance from the University of Alabama (UA).  The site, a national historic landmark, is monitored and preserved by UA museum grants and donations. Well known for its sacred burial grounds of the ancient civilization of Mississippian Indians, certain areas of the Park are used for camping and picnicking.  Walking trails overlook the  and the stone building houses the Museum.  The Mississippian Indians who once lived and worked on the very site some 800 years ago in the Black Warrior Valley tell the story of a once upon a time Moundville as the “Big Apple” of prehistoric times.

Following a 4 year hiatus and a 5 million dollar renovation, the Moundville Museum re-opened in 2010 and is one of the top cultural visits in Alabama and even rivals the Museum of the American Indians in Washington, D.C.  So it's a must see exhibit.
Artifacts on loan from the Smithsonian’s collection include a once excavated stone carved bowl from the site in 1905. Discovered by a  explorer, the bowl known as the   “Moundville Duck Bowl,”   has been named one of the most prehistoric artifacts discovered in the  home (perhaps still on loan from Smithsonian),  to the site where it was discovered in 1905.

The “Moundville’s Vulture Bowl,” authentic gorgets, carved stone rattlesnake disks,  afterlife hand/eye symbols etched in stone;  pottery, baskets, shells, beads, pearls and tools of the day join the wide collection of antiquities and treasures on display.
Unique to the exhibit, you can find reproductions within easy reach which can be touched by the visitors -- especially nice for youngsters and those of us who are in the moment of who came before us.

The journey into the Museum begins at the entrance as a flute and drums accompany the visitor into the first exhibit of Lost World of the Black Warrior.  It’s a storytelling event, an entire stage of a scene of full figure characters from the ancient world.   A ceremonial wedding party -- the bride to be, a lady of high rank, the daughter of a Chief, is ushered by 4 noble warriors and a greeter, dressed in feathered wings. Blue skies and puffy clouds follow and mythological creatures hover over the wedding party.

Moving into the Realm of the Sacred Ruler, the visitor is introduced to the Moundville Chief and his coterie awaiting the bridal party along the river banks.  The “rich culture” comes to life in the model characters’ elegant dress, elaborate body art; even the multiple strands of beads and pearls signify a thriving community, one of great resources.  The medicine man holds his rattlesnake disk, and, a groom listens intently to his spiritual leader.  The ruler is in full regalia.
The creation of the models is the brainchild of artisans and Native American Indians models. Facial features, head and neck impressions were cast.  A  company then created the body structure to fit the true faces of local tribal members.   Even more remarkable is the body poses and facial expressions, which are incredibly life-like. You can almost read what they might be saying.

There isn’t a dull moment around any corner of the cozy ambiance!
As the visitor approaches the archway into the Joining of the Worlds the surrounding murals of the civilization at work and play, complement the beauty of the artifacts, all shelved around the archway in open-sided glass displays.  Each and every pot, pipes, arrow heads, axes and other hunting tools of the day – get equal attention.

Past the painted murals of their complex society, I arrive at the Portal to the Starry Sky. A life like presentation is narrated by an elder Native American actor from . The medicine man takes us through his life journey -- a series of events leading to the afterlife.  Multi media, audio visual high tech light and sound show, with 3 D effects adds a nice touch to the storyteller's presence and who his people were.  Along the way, we meet his guide spirits who often come in the form of an animal, like a panther, strong and unyielding.

The museum is a magical trip from beginning to end; a grand and educational exhibit for people of all ages and backgrounds with a Cafe overlooking the Native American burial grounds.    You’ll see this ancient civilization of the Moundville people from  the ancient world in a new light.